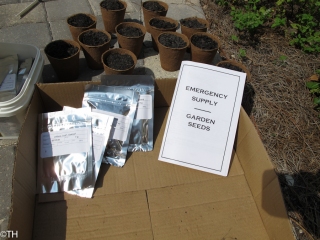 So I thought I would start an experiment back in September.
Garden is a 4’x8′ section plus a small planter (1.5’x3′). Rainfall was below normal and the dry season has begun, but watering did occur when needed until 5 wks ago when fresh water became scarce.
It was rather simple scenario:

I’m Joe 6-pack, and I purchased these survival seeds just in case. I don’t have much gardening experience. I have put aside some supplies, food, water, etc.. Collapse occurs, but I decide to bug in (suburban area) since most roads are blocked and fuel quickly ran out. It’s me, my wife and 2 children (8 and 10). About half the neighborhood stays. Most decide to be responsible for their own food. I quickly put seeds in the ground or in seedling pots that should grow this time of year in Florida. After the seeds are planted, day to day survival takes precedence, I pay little attention to the garden due to other demands such as security, fresh water (I’m surrounded by mostly salt/brackish), sanitation issues and a death in the family. Now it is December, canned food is running low and I’m out of vegetables. Going out and foraging has become increasingly difficult as a few roving groups that have been robbing/violently looting and a population surge into the area due to a nearby metro area where govt food supply lines collapsed. Disease has also broken out such as cholera, dysentery and rumors of malaria. I turn attention back to my garden….

So how did Joe 6-pack’s garden do with very little attention paid to it? For all intents and purposes it was a failure. Very few seeds germinated, plus the garden suffered from animal, insect and disease incursions. Overall success rate was about 7% with enough total food for 2 days. Joe didn’t know to stagger plantings, and now realizes that he should already have a crop of something else going. Not watching, his son used the planting guide as kindling to get a cooking fire going back in November.
I see this as a very standard scenario that most living in a southern coastal area will experience in an case of complete collapse and mentality of more individual/family than larger group cooperation (see previous post). This also plays into the discussion of year round garden production, harvest and storage, as well as seed viability and success with different levels of attention paid. These are all concerns preppers need to keep in mind when making a plan.
I found it rather interesting though was the seed germination failure rate. Carrots and leafy greens did well, but the rows were heavily damaged/scattered by animal incursion early on (lack of fencing). 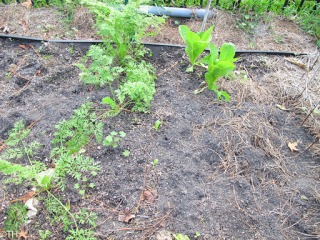 Beets, radishes and onions did not grow well or at all, and were extremely small and ‘weak’ for how long they have been planted. (lack of fertilizer and suitable planting area).

Cucumbers germinated well, but were quickly destroyed by insects. All that is left are 2 small plants. (lack of fertilizer insecticide). 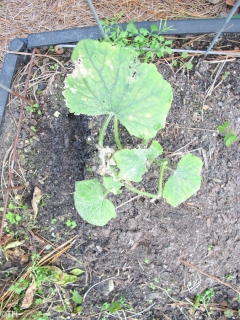 Fertilizer, insecticide, fungicide and good location are needed as well as dedication to the garden. This is an additional prep item(s)/plans many skip over. I am going to run the experiment again with a bit more of a prepared scenario, and heavier attention paid to the garden. Going into winter should be a bit more challenging, but at the same time…disasters don’t occur when convenient. At the end of the second run if I see similar germination failures I will list the product name so people may avoid  wasting their money.

Apex predator, preparedness whacko.
View all posts by PapaSwamp →
This entry was posted in garden survival seeds. Bookmark the permalink.