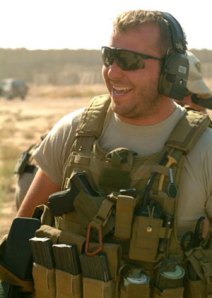 This story illustrates how quickly we forget on this day….that so many, warriors and their families, continue to sacrifice so we may go about our daily lives.

Sergeant First Class William “Brian” Woods was a Team Medical Sergeant of Bravo Company, 2nd Battalion, 20th Special Forces Group (Airborne). On August 14th, Brian was shot and killed by small arms fire in Ghazni, Afghanistan. At 32 years old, Brian had done multiple tours of duty in the War on Terror. He enlisted in the Marine Corps and served four years before joining the Army and becoming a Special Forces Soldier.

He leaves behind a wife, Elizabeth, and two daughters in Chesapeake, MD.

It seems that Brian’s funeral procession in St Louis county caused one motorist an “inconvenience”. The motorist complained to the County Sheriff.

The original email below was sent to Sheriff Glenn Boyer on Thursday, August 27. Below is the citizen’s email followed by Sheriff Boyer’s response.

>>>>>>>>>>>>>>>>
I tried to call you earlier this morning, but was unable to obtain your extension from the voice mail system as I was not sure of your first name or correct spelling of your last.

I was inadvertently in this procession as I was leaving work on 270 from Creve Coeur and proceeding on Hwy. 30 West. I have some issues and complaints. I called the Sheriff’s office last night, but the officer in charge would not speak with me. His name was Corp. Curtis. I am in no way complaining about your officers. I, however, was not treated very fairly when I called last evening because I wanted a ticket/complaint/or at least a slap on wrist for the people involved. Let me explain:
1) This procession should never have been held during rush hour traffic! Hwy. 270 is dangerous and people drive way too fast and there is too much traffic. This soldier’s certainly would not have want his family hurt on the interstate taking him to Cedar Hill. People were dead-stopping on the interstate even though the procession was in the far right lane, the other three lanes just stopped. There were many near accidents and possibly were after I drove through. I was in the 2nd to left lane, no way obstructing the funeral procession.
2) I exited off on Gravois (30 W), far right lane. Your police officers went in the left lane to stop any additional on-coming traffic so the procession could exit off 270 into the LEFT lane of 30. Again, I was in the right lane. The St. Louis County officer stopped and turned around at Weber Hill to return on 270 after the procession passed.
3) The road was not closed. (Only for president as far as I know.) Again, the road was not closed. Your officers only had the left lane blocked/closed for the funeral. All other traffic by MO law can proceed as long as they do not interfere (weave in and out )with funeral procession.
Let me say, that I did not know what was happening. I knew the did not have Kennedy coming to STL, at least not yesterday. I was at work all day. No news. Nothing reported on the traffic on the radio driving home.
Anyway, two of these dirty, nasty, renegade, who knows what motorcycle men that were escorting the procession proceeded to stop in front of me in the right lane on Gravois. I had to stop in the middle of an intersection. They proceeded to scream and yell at me about respecting this soldier, etc. One of them climbed off his motorcycle and came over to me and stuck his head in my car continuing to scream at me. I asked him what this was for and he told me I needed to stop as the officers had the road blocked and show some dang respect. #1, the road was not blocked, the funeral was in the other lane. #2, I am proud of our country and sorry for the family, but they had no idea where I was going or anything else. I could have a child at day-care, I could have been sick and racing to the bathroom, I could have a sick parent waiting for me, etc., etc.
#3, They are not law enforcement and had no right to stop in the lane on Gravois and they had no right to scream at me and intimidate and threaten me. If I would have had my pepper spray, I would have used it on this nasty man! He is just a big hoo ha that is not even related to this soldier. The other man did not get off his scooter, but was along side of my passenger window screaming.
I left an abusive husband 1 1/2 years ago and I did not need this intimidation. I was livid and shaking!!
My son is a deputy sheriff in another MO county. I respect police officers. It was not their fault as they were busy with traffic, but I called to make them aware of what was going on during this thing. The St. Louis County officer saw it but of course he was out of jurisdiction.
However, I called last night and your office asked me if I knew about this soldier. Again, I am sorry about him, but I am a taxpayer. I got a speeding ticket a few months ago and paid the fine. I do not deserve to be treated like this. I wanted to let the officer know how these men were acting. Also, they were driving into the turnarounds on Hwy. 30 and then back onto the road. the funeral was much further ahead. One of them nearly got hit by me and other people almost hit him and another as well. I wanted to lodge a complaint about them why they were still there, but no one in your office would take any information or do anything.
This was not a military funeral, even though it was a soldier. There were not military vehicles. It was a funeral and the road was not closed, the lane was closed, I was in the other lane and again, these nasty men had no right to do this and I would have liked them to get a ticket!
I am sorry for the soldier and his family but you cannot let these motorcycle renegades do this. They could have caused several accidents and I really wanted them arrested. If they had any respect for the soldier they would have dressed better and not looked and acted so scuzzy.

Yes, you do deserve a response and I am willing to give you one.

I would like to say that I am sorry for the inconvenience we caused you during the funeral procession of Sergeant 1st Class William B. Woods, but I cannot do so. I would ask instead that you take a moment of your time to take into consideration the scope of the event. Your very right to complain was the reason Sgt. Woods fought for his country and ultimately gave his life; thus making the ultimate sacrifice for you and your family.

Let me introduce you to him. After high school, Sergeant Woods entered the Marine Corps. After his contract was up, he joined the Army, where he became a Green Beret. He comes from a long line of military members in his family. His Uncle is a Vietnam Veteran and two of his grandfathers were World War II Veterans. His job in the Army was one of the most dangerous jobs – he was a sniper looking for the bad guys to stop before they killed or injured one of our soldiers. He has numerous decorations to include the Bronze Star and the Purple Heart.

He grew up in Catawissa and was best known by his middle name, Brian. He enjoyed the outdoors, playing sports, and skydiving. He had a wife, Elizabeth, and two daughters, whom he loved dearly. He was a soft-spoken, level-headed young man who was proud to serve his country no matter what the risk. Now, I did not know him, but I wish I did. I am quoting from newspaper articles written about him.

At the young age of 31, he was shot during an engagement with Taliban forces in Ghanzi , Afghanistan . He died of his wounds in Germany on August 16, with his family by his side. He did not choose the time of his death, nor did he choose the time his remains would be brought back to his home in Catawissa. He just did his duty. He was quite a young man.

While you were being inconvenienced in your car on your way home, there were soldiers just like Sergeant Woods carrying 100+ pounds of equipment in 120 degree heat, up some mountain or in the middle of some desert. They will shower out of a helmet liner if they get the chance. They will eat a cold meal of MRE’s; something most people would consider garbage. They cannot text their family or friends, or go to McDonalds, or watch TV. They can only continue the mission and look out after the guy to the left and right of them. They don’t complain because they know they volunteered. The only thing they ask is that we do not forget the sacrifices they have made.

One of the dirty “big hoo ha” bikers, as you call them, was Brian’s uncle, a Vietnam Veteran, like myself. We were not treated with a homecoming. We were spit on and called baby killers by a misguided public. Brian’s uncle was giving him the respect that he, himself, never received when he came back and I, for one, am proud of him for doing so.

You say that your brother is a deputy in another Missouri county. I am sure he would be proud to escort the casket of a fallen solder, the same as he would that of a fallen officer. I am also sure he would not agree with your complaint about being inconvenienced.

My mother recently passed away. She was a World War II Veteran, serving the U.S. Army. She would say, maybe you should pick up Sergeant Woods’ ruck sack and carry on where he left off. Then you could see first hand what it really is to be inconvenienced.

Per your request, I will forward your complaint to the Prosecuting Attorney’s Office for his review. It is my personal opinion that your complaint is self-serving and without merit.

And before any of you go to check Snopes to see if this is real or not (and Snopes is occasionally wrong), here is the article about the incident in the St Louis Post Dispatch(courtesy of Blackfive reader Val)
Here is a video interview of Sheriff Boyer:
http://ktvi.vid.trb.com/player/PaperVideoTest.swf
Last, you can send a donation to Brian’s little girls:
Monetary donations for Lily & Elle Woods can be made at ANY Bank of America location – simply ask to donate to:
Daughters of Brian Woods Trust Fund
Godspeed,Brian Woods.

Apex predator, preparedness whacko.
View all posts by PapaSwamp →
This entry was posted in Uncategorized. Bookmark the permalink.